Japan’s national food, Garigarikun collaborated with Ezaki Glico’s ‘Aunt Clare’s Cream Stew’, providing a surprising dream match!!! In the website of Akagi Nyugyo which sells Garigarikun, it says,”it is an ice candy which you can enjoy the real stew flavor, with stew-flavor candy mixed with stewed flavor-shaved ice with potato inside.” Ice cream sells good in summer, so it was Akagi’s challenge to have winter sales measure. SUGOITOKYO editorial desk is surprised with new winter marketing development by combining ice cream and cream stew. Sales price is 126 yen (including tax).

This is the second version 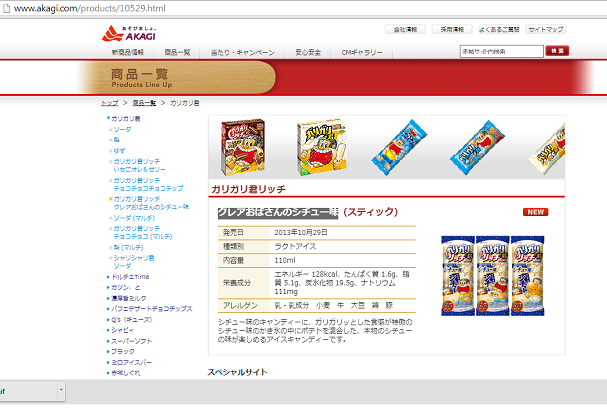 Last year, it sold Garigariku, corn potage flavor. It is placed as it’s second version. There were cons and pros in regard to its characteristic corn potage flavor. The person in charge at Akagi Nyugyo said, “we have pursued the delicious taste as ice cream.” According to information on the internet, “this stew flavor, after the rich milk sweetness and tasty flavor, deep rich taste of bouillon remain.” At food tasting for the press, people there said, “it’s delicious, like normal.”