The world’s Disney is joining the Circle!? First time for Disney to attend the nest of sub-culture, “Comic Market”!

Disney is attending “Comic Market” for the first time!

October 25th today, I found that Walt Disney Studio Japan will have a company booth at “Comic Market 85″ which is held during December 29th to 31 at Tokyo Big Sight for the first time. This is a part of the promotion of the movie called “Ender’s Game” which is to be released in Japan in January next year. The detail is to be announced.


Disney’s Mr. Sotaro Yuri, one of the founders of this project and the publicity producer of this film said, “‘Ender’s Game’ draws the characters distinctively just like Japanese anime.” His comment showed that the fan activity and “Ender’s game” have a high affinity.

It’s official site is making use of the work byAkane Aki ,singer in Nico Nico video, and an animator (singer and painter)

Speaking of Walt Disney, it’s work is like a fairy tale, loved from children to adults in the United States, Disney’s contents are like a trend of the American Culture. It’s branding so called “dream land” is distinctive and exclusive, so it has maintained the refined world view. On the other hand, so called Comike (Comic Market) is a nest for Dojin (fan-based) culture and sub-culture (counter-culture). It is based on animation work or manga or celebrity. The Dojin (fan-based) artists create “derivative works” by inflating their imagination. It is developing an original culture by inflating their imagination of their work. (If you search the word “Miku Hatsune”, which Crypton Future Media, Inc produced in 2007, you will find the videos of more than 205,000 Dojin (fan-based) artists uploaded their videos in Nico Nico video) (as of present today, October 25, 2013)

In Comike (Comic Market) world, copyright do not exist, but with Disney, it was the presence which had restricted the activities of Dojin (fan-based) mostly.

In Comike, Disney has thoroughly prohibited the Dojin (fan-based) exhibition on Disney-related work, it considered it as outrageous and abominable act. To print their own Dojin (fan-based) work, even if printing company found that it’s related to Disney work, it rejected the printing. So what made this change, Disney to be attending this Comike (Comic Market)? There is a tension similar to a girl who’s in prestigious girls’ school joining the drinking party of rugby boys from boys’ school, who came after the rugby practice. By participating Comike, is it aiming to create a foundation for Disney’s TV animation next year? 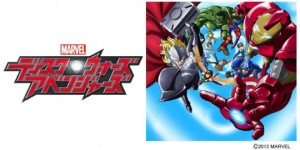 It is said that Dojin (fan-based) culture is indeed, the driving force to make Japanese animation more popular. I also wrote about “Why do characters in recent animation in Japan dance at the end?” previously, but if the character in the Japanese animation dance in the end, there are many Dojin activists who will upload the imitated dance, or create video making other characters to dance in the video sharing site such as Nico Nico video in large number. Eventually, there is an effect that Dojin artists raise the popularity of the anime itself. Animation industry must be feeling the advantage so in the recent animation works, I see their method, presenting animation that can easily develop Dojin activity, intentionally. Disney is probably feeling that having Dojin support will make animation to be more popular.
This winter is going to be fun!!!
Tweet