Japanese youngsters get dumber by SNS 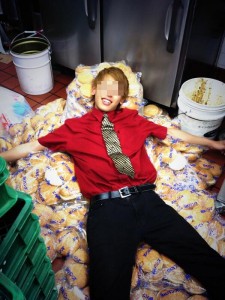 There were young people who posted their stupid behavior on Facebook or Twitter and caused bashing on internet from a while ago. However, frequency of stupid posts is arousing in this recent 2 months and there are too much. In July, there was a post of photos by an employee of Lawson, convenience store chain, entering in the ice case on Facebook.
This incident led Lawson to disengage the franchise agreement with the store. It became a big news, but incidents like these happened continuously. A high school student entered the ice case at MINISTOP, a convenience store chain, and the store filed a claim. Part-timer of Hotto Motto, obento chain, entered in the refrigerator and also same the same thing happened with Steakhouse Bronco Billy, a female staff of Marugen Ramen, Kadoma store put a frozen sausage in her mouth. There was a part-timer who lay down on buns at Burger King and a part timer of Pizza Hut who put the pizza dough on its face. In every case, the person’s name, school name, part-timer’s store name are identified and burst into flaming (bashing) case. Severe judgment was decided. It led the Bronco Billy, Adachi Umejima shop to close the store for the incident, and the company is considering to file a claim for the damage compensation to the part-timer. (Exempt from http://biz-journal.jp/2013/08/post_2750.html )

Recently, such incidents occurred frequently in Japan, as mentioned above. Also today (August 28), a new incident occurred at a sushi restaurant. (The image of a man customer putting his mouth directly into the soy sauce bottle was floating around the net)
Most of the images that brought bashing were posted on their Facebook or Twitter. 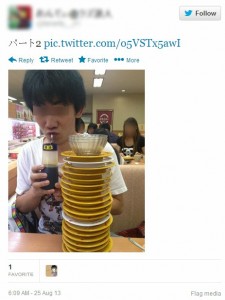 Twitter is called as ‘stupid detector’ in Japan and considered as a tool for fools to expose their stupidity under the light of the day and is acknowledged as ‘a mirror reflecting the lack of intelligence’. Not just Twitter but also Facebook is.

Intelligence level and dependence on Facebook are in inverse relationship

Around myself, I can see the tendency of inversely proportional relationship in between dependence on Facebook and intelligence level. A wise man do not expose their private life to the world except when he has a specific purpose in business. I do not think posting pictures of what you ate 3 times a day on internet is foresight or forethought. 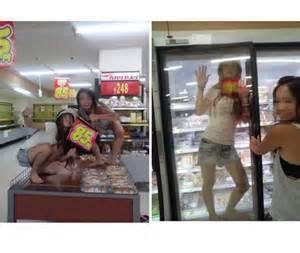 ‘Fool detector’ is a perfect naming. Internet did not made people stupid. Internet only made it available to visualize the presence of stupid people. Today and tomorrow, we will find the fools who do not carry common sense. While we enjoy secretly to the ‘little turmoil of the society’ caused by these fools, we yell relentlessly at the fools instead of applauding them and enjoy releasing day-to-day stress.

Soundness of internet speech society is supported by the perverse ‘fool detectors’- the people who stay in safe place and enjoying the taste of honey, which is ‘misfortune of others’.