Japanese netizens get excited with “BALS”

“BALS” is a word from Ghibli film

“BALS” was originally a spell of Ghibli animation film “Laputa: Castle in the Sky”. It means “close” in the Laputa language spoken in the world of Laputa. It is a spell that stops the circuit center of Laputa Castle and destruct the castle.


“BALS” being tweeted whenever TV broadcasts 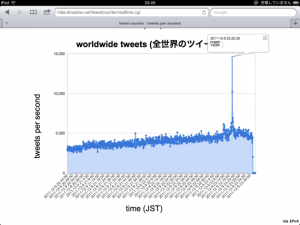 Despite the long film, Laputa has been broadcast-ed many times on television in Japan. (Some TV program aired Laputa 10 times or more) Each time when Laputa was aired, posts on facebook, twitter, 2ch (huge bulletin board) and niconico channel in Japan related to Laputa upsurged. Then, in the last of Laputa, when the main cast spelled “BALS”, the posts “BALS” increased rapidly mainly on 2ch at the same time.

Server down, one after another

Since so many people posted “BALS” on 2ch and twitter, “BALS” popularity caused servers down since 2009. It has been said that “BALS is a spell of causing servers down”

“BALS” has contributed to strengthen servers?

It seems that operating companies has learned by 2013 so that the word “BALS” rarely causes servers down now. “BALS” might have accomplished a role to help strengthen servers.
Tweet