This is Kanna Hashimoto !

The most booming person in Japanese internet society is…Kanna Hashimoto. One out of three Japanese people around you must know her.

Kannna Hashimoto, a fourteen year old girl, was born in Fukuoka Japan on February 3rd, 1999. As a member of an idol group “Re­v．from DVL”, she’s singing and dancing around greater Kyushu area in Japan. Someone uploaded her photos onto the Internet and, all of a sudden, huge number of people shared praising them on line and commented like ” She’s like an angel!” “She’s too cute!”. In the end some Japanese broadcasting companies televised the extreme fever on their TV programs. Too many offers of appearance on TV program and interview are rushing to her, her agent says.

This is the photo prevailed throughout the world in a moment. 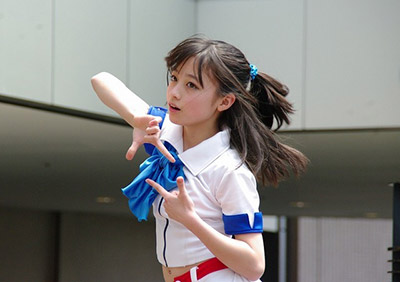 Based on a brief report of existence of her “lover”, sugoitokyo editorial department started “emergent investigation” on the net and FOUND this movie. Wow who’s this bald buy!!! To our astonishment, the guy along with her turned out to be “Takahashi meijin” and this was recorded in a event. No way! He cannot be her lover. Never. We got so disappointed as we were so excited to seek for the “scoop”, however, we were happy to see “Takahashi meijin” on the net after a long interval and happened to know he’s still alive……

Dark side of Kanna Hashimoto

The cyber world is filled with plenty of “bad reputations” regarding her real image.


“In short she’s like a blatant noisy middle-aged woman lol. In spite of her nice looking, she’s so brisk and lively like a conventional strong-willed Hakata woman. In addition she offensively appeals her beauty by herself……” (commented by a fan of “Re­v．from DVL”)

On the YouTube site above mentioned, you can easily find many viewers commenting as “Dirty voice” “Her voice is…lol” “i might have fell in love with her if her voice was cute lol”. Some people dislike her “too husky” voice. Other people seems that they don’t appreciate her aggressive attitude that doesn’t match a “cute girl”……