Is it correct that Japanese and wasabi are inseparable? The answer is NO. In Japan we sometimes use wasabi when we eat sashimi and sushi, however, no other usage comes across my mind. How about wasabi mayonnaise of Gindako……? Yes, you can count it in, but what else? #Gindako……a Japanese famous takoyaki shop chain.

Though, for the people outside of Japan, when it comes to japan, they hit upon wasabi. When it comes to wasabi, Japan comes in the mind. Six months ago I traveled in Malaysia. Sushi with wasabi, I bought in Isetan Malaysia, was a small gift for my friend from UK living there. He opened a small plastic package containing wasabi, put a small portion of wasabi on his little finger. Can you imagine what he did the next moment? He closed his left nose hole with his left hand, moved his right little finger with wasabi on the top, placed the wasabi at the “entrance” of his right nose hole and VACUUMED it! Wasabi went through his nose hole to the deep inside of the throat……it must have been his own way of welcoming me visiting from Japan. #Isetan……well known Japanese department store operating worldwide.

Three months ago I traveled in Thailand. Two Middle Eastern men suddenly talked to me, at midnight in a convenience store in central Bangkok. Despite that they wanted know many things about “snow” in Japan, I treated them unkindly as they looked suspicious. Moments later they started to ask me where in the shop they could find wasabi. I helped them look for it but in vain. I asked them “What food are you going to use wasabi for”. “Tell us what food wasabi is good for!” they questioned. Middle Eastern men looking for wasabi without knowing how to use it…… 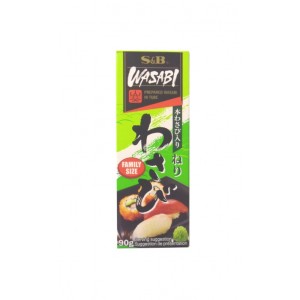 Wasabi as a communication tool

Those are the stories about wasasbi I experienced within the last six months. As you know wasabi worked not as a food additive but as an international communication tool. I believe we can make the best of it and I hope for development of cultural diplomacy based on wasabi.